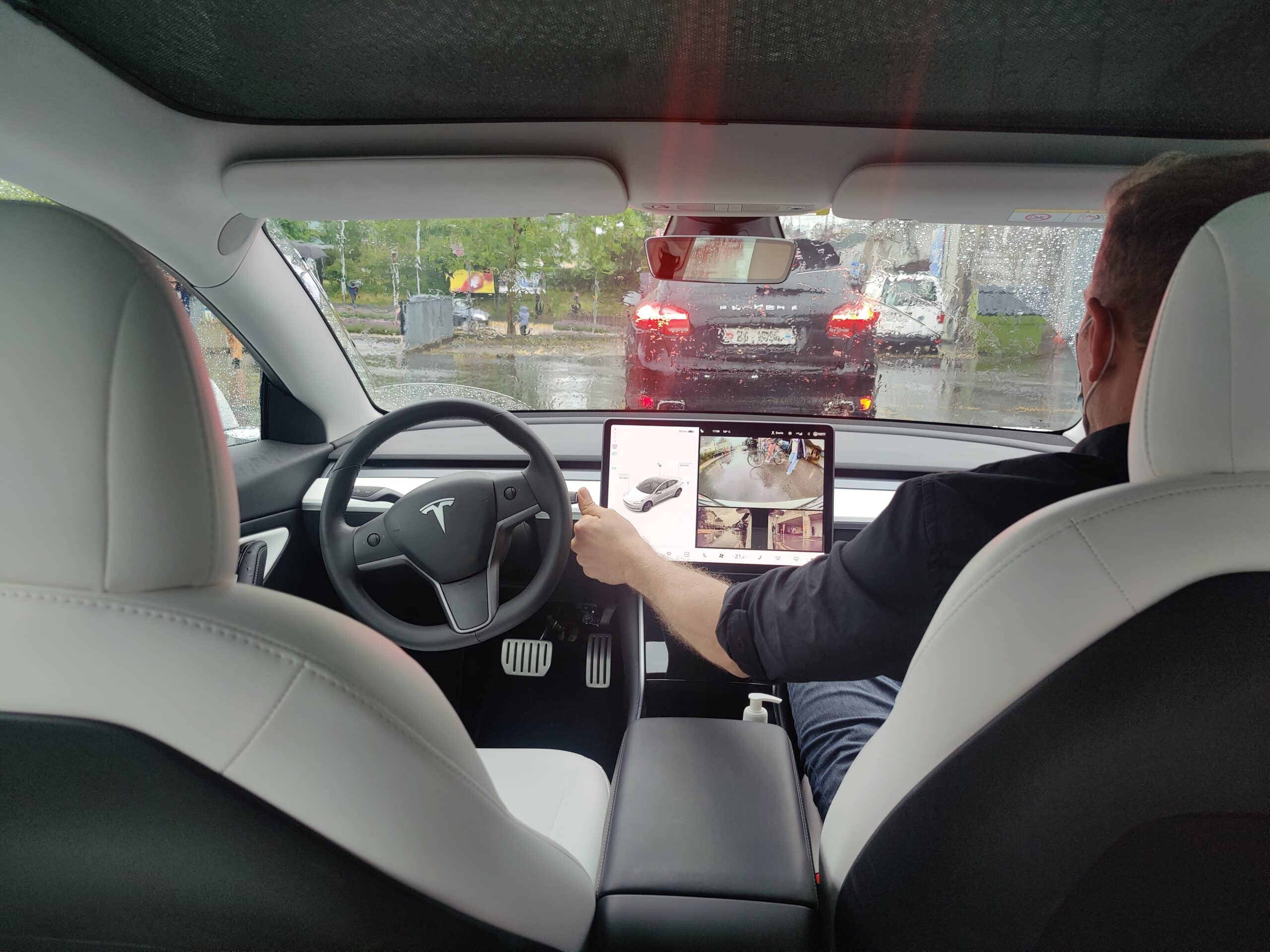 Is it permissible to take a Tesla for a private learning drive despite the electronic handbrake?

The Traffic Regulation Ordinance Article 27(2 ) simply states: “…the attendant must at least be able to reach the handbrake easily.” The meaning of this law is that the passenger:in could intervene if there is a danger. A written statement by the Federal Roads Office from 2009 states that electric handbrakes are only approved for learning drives and the driving test if they are comparable to conventional handbrakes in terms of their mode of operation. This is considered to be fulfilled if it brings the vehicle to a controlled stop even at higher speeds. The accelerator pedal must not override braking, even under full load.

The Tesla Model 3 has an electronic handbrake that is activated by a long press on the gear selector lever. It applies the brakes in a controlled manner at full speed and brings the vehicle to a standstill via the rear axle. If you want to interrupt the emergency braking, you can release the button again and continue driving. Accordingly, the Zurich city police have declared the Tesla Model 3 suitable. For the Zug police, too, nothing stands in the way of a private learning drive with the Tesla, provided the law is observed.

Can I take my private Tesla to a driving test?

At the road traffic office in Zurich, tests are also taken in a private Tesla (without driving school pedals). So, with the current legislation, this should be possible in all road traffic offices. Driving tests cannot be performed with a rental vehicle, except with a written permission of the lessor.
We rather advise against going to the test with the private vehicle. Often the Expert:in choose a less dangerous route and evaluate it more strictly. Statistics would probably be more to the detriment of private test drives. However, we do not have representative figures, as very few take the test privately.

Does it make sense for novice drivers to learn with a Tesla?

Yes, definitely! Teslas are among the safest cars around. Especially the active safety like emergency brake assistant, lane departure warning, side cameras, power reduction, dosed electronic handbrake, all-wheel drive (optional), etc. are great helpers for novice drivers. In addition, electric cars are easier to drive. In this way, new drivers can sharpen their traffic sense at an early stage. Even during maneuvers, the precise parking sensors and the cameras quickly give you confidence and let you focus fully on steering. By the way, cameras and sensors may also be used on the driving test. Ideally, one should first take a few driving lessons to train vehicle operation and traffic vision. Then it is recommended to do easier exercises at the beginning and to avoid pressure. After all, driving should be fun and not stressful.

Can I do learning drives with the Model S, Model X and the Model Y?

The same applies to the other three models as to the Model 3. However, we do not know all models in detail. It’s best to try it out briefly to see if you can do the following:

Am I allowed to drive switched if I learned with a Tesla?

Yes. We recommend booking 1-2 driving lessons with your own car after the exam. There is a discount for these at DriveLab. Just use the coupon code “gotmyowncar”.

What are your experiences on private learning drives with the Tesla? Post it below in the comments!

Made with ❤️ by